After posting the previous article, I have done some tests on a disk encrypted with PGP WDE, and benchmarks show that the performance hit is quite big. Strangely, there is no visible difference during the normal use.

The test has been run on two identical Macbook Pro C2D 2.4GHz machines, with Mac OS X10 .5.7. Both machines use the same internal hard disk: Western Digital Scorpio Black  320 GB 7.2k RPM (WD3200BEKT). One of the machines has the internal disk fully encrypted with WDE.

The test has been conducted using QuickBench by Intech Software; this application runs the same tests using blocks of different sizes, I am reporting the average over all block sizes. 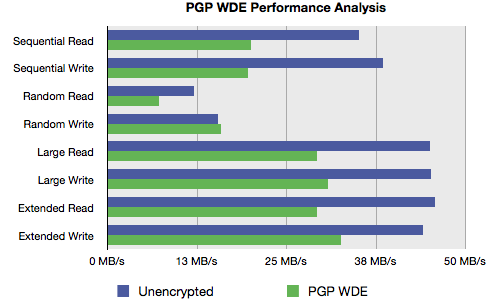 Looking at the average over the difference tests, the performance hit of WDE is roughly 34%. As mentioned above, I am surprised by these figures: I have used WDE for some time, and there is no perceptible difference in performance.

You might want to look at this thread on the official PGP forums:

... I can only conclude that disk benchmarks are not a good performance measure, as they do not reflect typical disk usage.

Securing Data on a Mac

This article covers the different options available on the Mac to secure confidential data.
← Previous