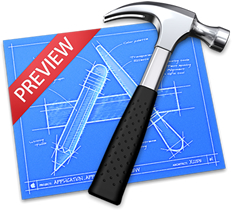 I resisted for a couple of weeks, but finally I installed Xcode 4. The last release is called GM, so I expected it to be complete in terms of features. I was wrong (ok, I didn't read the release note)… If you use Interface Builder plugins you'd better stick to Xcode 3 for now: they won't work, and also the stability could be better (I did not lose any work, but Xcode crashed, and crashed, and crashed again).

Fortunately Apple allows you to go back to Xcode 3, you will still be able to open your projects, and the old preferences won't be touched. That being said, I was quite hooked by all what Xcode 4 offers, which outweighs the instabilities (especially the support for Git, single-window interface, and improved editor). Only problem was that I needed to use an IB plugin for the project I'm working on. There are probably other solutions, but this works.

Assuming you already installed Xcode 4 upgrading the older version, here are a few steps to get you up and running again:

I really hope the final version will support IB plugins. Anyway, apart from this glitches, Xcode 4 is a huge step forward in terms of interface and features.